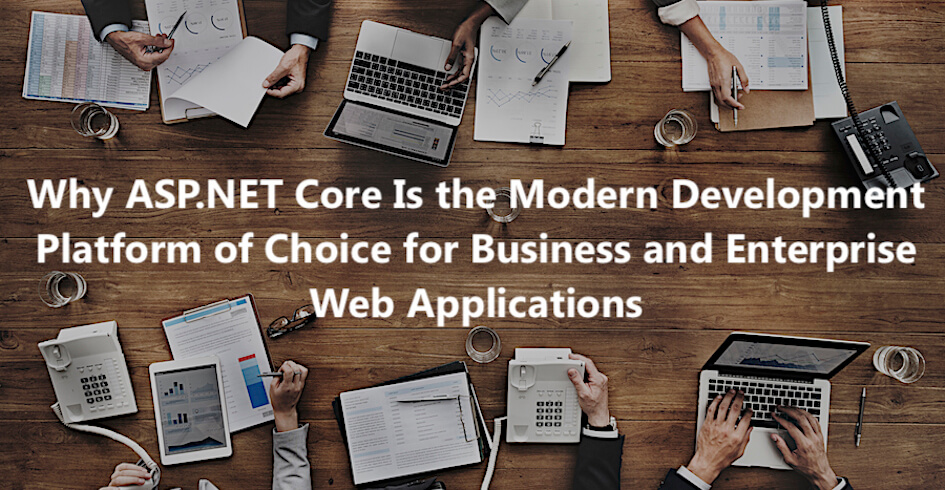 We’ve written a lot about ASP.NET Core. Our team has been using it from day one – largely due to the significant performance gains (more on that in a minute). There are lots of other reasons developers and admins like the platform as well, including technical things like built-in support for Razor pages, dependency injection, various JavaScript frameworks, yadda, yadda, yadda.

But technical nuances are not how most corporate VPs and C-level executives make decisions. Fortunately, there are a lot of real-world, practical reasons why businesses and enterprises are moving their projects to ASP.NET Core … the kinds of things that impact the bottom line and warm the hearts or the most conservative CFOs.

What’s Old Is New Again – The Difference is “Core”

Even though ASP.NET Core was launched just a few years ago, it is firmly based in Microsoft’s original web development platform – ASP.NET 1.0 – that was originally launched in January 2002. Yes, there are substantial and important differences. But the main syntax and formats are familiar. An existing, seasoned developer who had been building websites and software on the ASP.NET platform can transition to ASP.NET Core relatively easily compared to learning an entirely new programming language.

In short, there is a lower learning curve than transitioning to other major development systems. A lower learning-curve means lower costs in training, time, and recruiting.

Another compelling reason that your boss’s boss will like ASP.NET Core is the same reason deep techies like us love it – blazing fast performance.

We’ve all become a bit jaded over the years. Computer and software companies promise amazing speed increases that turn out to be marginal – sometimes unnoticeable – improvements. That’s NOT the case here. As we’ve previously reported, we’ve had real-world production projects increase in speed by orders of magnitude using industry-standard performance metrics. This is more and more vital in an increasingly mobile world.

There are a lot of technical reasons why ASP.NET Core is so much faster than its predecessor. But what matters for our purposes here is that the performance improvements are real and measurable … people will notice. And fast apps mean more units of digital production per infrastructure resource unit.

Faster apps, happy users, and lower incremental infrastructure costs over the long-term … that’s a calculation that will get the attention of the most skeptical decision-maker.

Cross-platform Is Not Just a Marketing Gimmick

In the old days, software was the gateway drug to lure businesses into technological walled-gardens. If you wanted to run Microsoft Office, you had to have a Windows pc. Those days are SO last millennium.

Applications built on ASP.NET Core can be cleanly and effectively installed and run on every major operating system – Windows, Linux, Unix, and MacOS. If your operating system is up-to-date, you can run ASP.NET apps on whatever hardware you’ve got on hand.

Sure, there are a few caveats, of course. But that’s a powerful sea-change in portability that’s brand new in the world.

The Best of Both Worlds – Fully Supported AND Open-Source

For some folks, opensource software is almost a religion. The allure of “free” has tempted many-a-business to install and run software coded by cadres of unknown and unaccountable coders scattered about the globe. Sometimes it works out, sometimes it doesn’t. Obviously, if a piece of software is “open-source” and “free,” there are few or no resources available to do quality control, consistency checks, produce quality documentation, and provide support.

To be fair, there have been several ostensibly “open-source” projects that have found a quality community and been able to structure actual business models to support them. And famously, RedHat grew to be a multi-billion-dollar company by flipping the “open-source” model on its head. They locked down and formally versioned the Linux OS and then charged substantial fees to support that particular version.

But this is the kind of thing that gives nightmares to corporate CTOs. No matter how good the code, if you are running a mission-critical business application on a piece of unsupported software and something goes wrong, you can find yourself explaining your technology roadmap and why the downtime cost millions in revenue to an angry Board of Directors who’d rather be golfing.

ASP.NET Core is open-source – so there are no licensing costs. But it’s also fully supported by Microsoft – a multi-billion-dollar technology giant. For the folks in the penthouse conference suite, this is fiscal candy.

There are a lot of really great reasons that Microsoft is making this investment. We think that it’s an absolutely brilliant strategy from both an offensive and defensive standpoint as they do battle with Google and Amazon for market-share. There are far too many reasons to list here … perhaps it’s another blog post.

The point is that not only has Microsoft invested untold millions of dollars in ASP.NET Core, a very large part of their reputation and long-term corporate strategy depends on it. This makes make everyone from the director-level on up sleep better at night.

ASP.NET Core Is Getting Better All the Time … FAST

Microsoft’s CEO – Satya Nadella – has seemingly given Scott Hunter – Microsoft’s Director of Program Management for .NET – the green light to run. The pace of innovation and feature development on the framework is proceeding at an amazing pace. Members of our team have been in the technology game for decades and we’ve never seen anything like it. Not only are innovations and features coming fast, but the quality of releases and documentation are exceptional and Microsoft is listening to community needs and requests.

This means that as technology advances and company needs grow, ASP.NET Core has the resources and innovative inertia to grow right along with it. The odds are pretty good that you won’t have to change development frameworks again any time soon because something is out of date.

We Heart ASP.NET Core and Your Business Will Too

Usually, a new technological advancement only pleases technologists, bean-counters, or managers. This is one of those rare instances when everyone wins. That’s why businesses and enterprises are embracing ASP.NET Core.

If you need help building a project or migrating it to ASP.NET Core – or if you just have questions about the framework – just let us know. We are always happy to help.