The .NET Foundation & Why It Matters 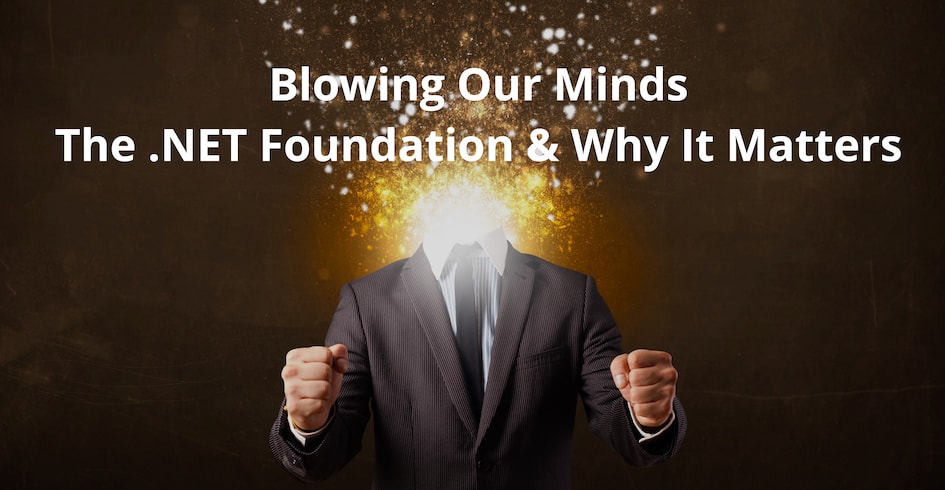 If you’ve been following our articles and work over the last few years, you know that we are big fans of the .NET Core development framework. We think that it is THE business software and website development platform of today and the future. It’s great. But what really stands out is how .NET Core is an expression of the what we call Microsoft 4.0 – a New Golden Age of Microsoft.

Understanding the importance of where we are now requires a brief dip into where we have come from.

Microsoft 1.0 Through The Dark Years

Microsoft was founded in 1975 as a contract provider of interpreters and operating systems (Oss). When the IBM PC and pcJr came out in 1983 and 1984, they were mind-blowing at the time. They ran on MS-DOS, which had only come out three years earlier. Microsoft immediately started creating basic computer games and their famous Flight Simulator to run on them. This is Microsoft 1.0 – a bunch of technology cowboys wrangling software for fun and profit.

It was just a few years later that Microsoft started rolling out their suite of productivity tools – starting with MS Word. Over the next decade they virtually drove the competition out of the space and still dominate the segment through their Microsoft Office Suite and the Office 365 subscription service. Concurrently, they were developing the first versions of the Windows OS. This was Microsoft 2.0 – a plucky software giant-in-the-making disrupting the established players (Bill Gates was still in his 30s).

The next step was corporate world domination. The 1990s saw computers and tech going mainstream. The “Internet Age” was upon us and large organizations were discovering the efficiencies and power technology could bring. The internet was exploding. Microsoft leveraged their position in the market to be the business market leader. This was Microsoft 3.0 – a burgeoning corporate behemoth stacking piles of cash in every spare corner of their offices in Redmond. It was good to be the king.

But kings can become complacent.

Famously, Microsoft weathered the Dot-Com Bubble with their reliable corporate licensing fees in place. But they did not see what was coming. The five years between 1995 and 2000 saw the launching of Google, Amazon, eBay, PayPal, and dozens more. Hosting companies were ramping up, including Rackspace, The Planet, and other major players. That brief five-year window also saw the return of Steve Jobs to Apple AND the launch of the Apache Web Server. Each of these developments was an existential threat to Microsoft, but they just did not see it – or if they did, they did not react. Instead, they became cloistered and insular in their market power. What followed was roughly a decade of reorganization that we might think of as “The Lost Years.” And while the rest of the market doubled, even Microsoft company stock traded directionless in a virtually flat range of $20 - $30 per share for nearly a dozen years.

But now everything has changed.

We are now in what we see as a New Golden Age of Microsoft – Microsoft 4.0. They have shed the stigma of The Dark Years. The 2010s have seen the launch of the Azure Cloud hosting platform, the loosening of IP licensing restrictions, the open-sourcing of large sways of software and additional IP, a cooperative stance toward other platforms and technologies, and much more. And in our view, all of this awesomeness is capped by their significant investment in cross-platform development in the .NET stack – specifically .NET Core

Boom. Even the stock price has quadrupled.

This is Microsoft 4.0 … a dynamic, agile, rapidly innovating platform power-house with a fresh dedication to open-source development and community-building unmatched by any other major technology company.

This Is Where the .NET Foundation Comes In

Microsoft has learned well from both their successes and errors of the past. They know that the platform is the most important thing in development, cloud, infrastructure, and software. They also know that the best, most efficient way to bring software developers and businesses to their platforms in the modern age is to keep those platforms open, free, community-driven, and dynamic. In short, if you provide the tools and environments that foster freedom, innovation, creativity, and community people will freely choose to work on and in your platforms. That, in essence, is the message and intersection of open-source and free-market economics.

The .NET Foundation was set up to help facilitate just that. It’s a non-profit 501(c)3 organization created to support the open-source .NET community and projects by:

Yes, Microsoft organized the .NET Foundation and Microsoft team members comprised the initial Board of Directors. But now that it’s rolling, elections were just held and an entirely new boards is in place – all but one are platform contributors who work and operate outside of Microsoft. There is so much confidence in the project that the Technical Steering Group even includes the likes of Google, RedHat, Samsung, and others – businesses that in other times and circumstances might be considered competitors.

This is a VERY different world from the Microsoft of The Lost Years.

It’s the Best of Times to Be Working on .NET

We are super-encouraged by what Microsoft is doing with open-source and .NET Core, and we want to extend our sincere congratulations to the new board of the .NET Foundation. We support your efforts and are excited by the future of websites and software that we are building together.

If you have any questions about the .NET Foundation or working with .NET technologies for website and application projects … that’s what we do every single day. Just shoot us a note. We’re always happy to help.

If you want to read some of our previous articles on .NET Core (our development platform of choice), you can find them here:

Migrating Existing and Legacy Projects to .NET Core – Will It Hurt & Is It Worth It?