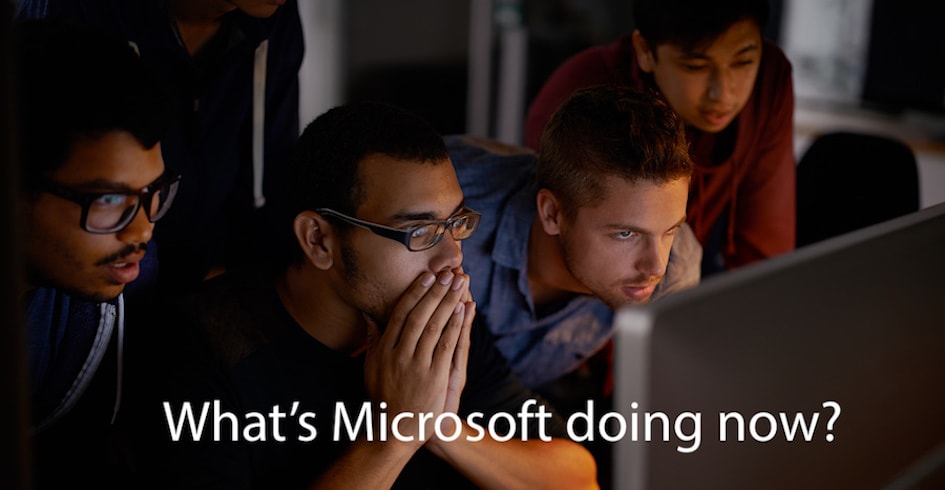 Microsoft has done a lot of great and innovative work over the last few years. Serious, we’re big fans of their progress and roadmap of open development platforms. It’s quite impressive. But one thing that Microsoft still does from the old days is rebrand and change product names every few years, seemingly just to create confusion and consternation in and amongst their users. For example, at one point in time the brand “ActiveSync” referred to three different Microsoft software product and a series of separate IP licenses … at the same time.

This week, Microsoft announced the launch and release of a brand-new service – Azure DevOps. If you were to simply review their launch materials (liked to here) you would be forgiven if you assumed that it was a completely brand-new service. Well, it's kind of is and it’s kind of not and – judging by the social media posts we’ve seen over the last forty-eight hours – there are a lot of smart tech folks out there who don’t know what to make of it yet.

So, let’s see if we can clear that up for you.

Clearing Up the Azure DevOps and TFS Confusion

Previously, Microsoft had a bunch of products:

If you are a regular reader of our blogs, you might have seen out a summary of the GitHub acquisition and why we think that it’s a brilliant strategic move by Microsoft. Microsoft’s launch of Azure DevOps is a but blinking-neon sign that we were spot on in our analysis and that Amazon AWS and Google are worried about it.

You can read our GitHub article here.

Simply stated, Azure DevOps is an amalgamation of all four of those four products we listed above wrapped into a tight, efficient package. It is no longer a series of platforms and apps. It is one platform where software and app developers can work, manage, collaborate, test, post, and distribute their work from one interface. It’s a seamless desktop work-surface for all things code accessed from the cloud.

Why Is Azure DevOps So Powerful?

A combination of local and distributed developers would all have Visual Studio installed on their local computers where they would do their work. The project leader would have a project management tool of some sort – maybe Microsoft Project, maybe OpenProject, or maybe they just kept track and assigned tasks using Slack or one of a dozen other such collaboration tools. Developers would pull their code assignments from GitHub each day and then push them back when they were done so that others could work on their parts. The code itself could be Linux-based, or Windows, or .NET Core, or JavaScript, or simple HTML, or a Sequel DB, or Python … any number of or combination of code languages and platforms.

As the project concluded, the team leader would wrap up all the bits and pieces and create test / lab environments on a local machine or in the cloud somewhere. At the end, code would be compiled and published out to a hosting or cloud environment to go live. And even though that might sound a little complicated, it was a FAR cry better than before and we were all happy. At least we thought we were until that reality bumped into the long-term vision of Satya Nadella – CEO of Microsoft – and his leadership team.

Because now all of that can take place in one place. To borrow a Lord of the Ring (LotR) phrase, it’s the one DevOps platform to rule them all.

A Development Platform, NOT a Coding Prison

Here is the brilliant part ….

The Microsoft of the 1990s and 2000s would be tempted to use this kind of thing as a walled garden to perversely incentivize (and punish) users into using ONLY Microsoft products and services. The Microsoft of the 2010s – the Microsoft of Nadella – is continuing their trend of universal agnostic tech-love. The new Azure DevOps doesn’t care what coding language or framework or platform you use. It also plays nice with other services.

And – even though the word “Azure” is included in the name of the product – you can freely and cleanly publish anywhere you like. It a fit of egalitarian fervor, Azure DevOps will let you publish directly to Amazon AWS, the Google Cloud, or just about any place your tech heart desires without having to jump through sophisticated hoops of porting and converting and uploading and downloading.

With each product and version release, Microsoft proves that its new, open philosophy is a real thing. The word “Azure” is there to drive the Azure brand into the conscious and sub-conscious minds of the users. And we have no doubt that additional Microsoft products and services will be made available at special rates – we’d be really surprised if special deals and packages did not arrive on everything from Office 365 to database licensing. But that’s just good business. Said another way, the old model of tech business used to be carrot-and-stick. Microsoft is taking the lead here with a carrot-and-carrot-and-more even carrots approach.

Now, that doesn’t mean that Microsoft doesn’t WANT you to only use Microsoft products and services. They really, really do. But what they KNOW is that by delivering lots of value at every turn. And you are going to pay a monthly fee for the stuff you use. But it is a low, super-oct-effective program and you don’t have to sell you digital data soul to Google or anyone else to capture the value. That’s because Microsoft wants you to use their services – first and foremost. They know that adoption and user-base are the real value in a modern tech economy and profit-maximization goes to the platform that doesn’t just compete and survive … but to the platform that wins.

It’s a winning strategy. And Amazon, Google, and IBM are worried.

Thanks for reading. If you have any questions or need help getting on the cloud or with your websites and apps, just let us know. We are always glad to help.

More info: You can read Microsoft's write up on the Azure DevOps launch here.