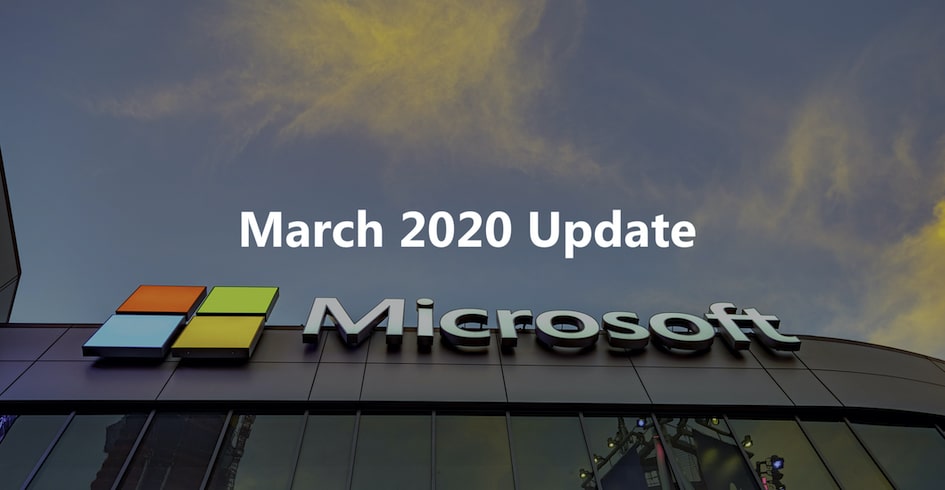 As we write this article, the world is shaking in the shadow of the COVID-19 pandemic. While here at IowaComputerGurus we have complete confidence that we’ll rise above this crisis. While we are all working remotely — including at Microsoft — the team in Redmond has made a few important announcements this month. So let’s take a look at what’s going on in the world of Windows, .NET, 365, and the Azure Cloud at The Edge.

There Shall Be Only One — Announcing .NET 5 Preview 1

As may remember, Scott Hunter is the Director of Program Management .NET at Microsoft. His blog posts are a reliable source of the latest info in and around the developments in .NET and the .NET Community. And on March 16th he dropped a big announcement.

It has been previously announced that the .NET ecosystem — currently split into regular .NET and .NET Core — are going to go through a unification process. The .NET 5 release is receiving a lot of the fit, features, and functionality of the .NET Core framework. For good reason. Not only are the current iterations of .NET Core the best-performing code platforms to date, the 3.1 release was the fastest-adopted version of any .NET ever. “Regular” .NET 5 is great. Heck, Scott filled more than 1200 words describing all the new features and upgrades. We’ve taken a loon and it’s all very impressive. And that means that there is too much for us to include here.

But one thing is very clear. The future is in a unified development framework. Further, we agree with Scott’s “strong” recommendation that ALL new projects should be built in .NET Core 3.1 or on .NET 5. That will make the transition to the coming unified framework FAR easier.

You can read Scott’s entire blog post for all the technical details.

How Many G’s Do We Need? — Microsoft Acquires Affirmed Networks

When this acquisition was formally announced on March 26th, we were surprised. But when we looked at the deal in the context of Microsoft’s other announcements over the last year or so it makes total sense.

Everyone agrees that 5G is the future of the future. It will allow a faster migration to The Edge and facilitate the building of robust edge networks. Affirmed Networks makes specialized virtualization software that allows regular computing servers to act and perform like customer-built 5G workload servers. This is BIG deal because there is simply no way to affordably deploy specialized devices for 5G workloads fast enough and cheaply enough to meet demand. This unseen bottleneck is one of the chokepoints for 5G deployment and Affinity Networks software solves that problem.

Microsoft knows that 5G is going to be a gold-rush over the next few years. So, whoever gets there first will have a HUGE market advantage. And now Microsoft owns a valuable piece of tech that will give them a leg up. This will drive even more adoption and deployment on the Azure Cloud network, especially at the edge.

Trust us. This is a market segment and technology stack to keep an eye on. You can read the announcement on The Street.

Office By Any Other Name Smells As Sweet

On March 30th Microsoft announced a big change to Office 365. As of April 21st, Office 365 was going to get an upgrade to its licensing models at the same price points AND get bundled with cloud-based AI features. The new product will be called “Microsoft 365” and they are giving it the tagline “the subscription for your life.”

If the name “Microsoft 365” sounds a bit familiar, you may remember that Microsoft used that name to market an upscaled version of enterprise, seat-licensed Office products and services. They like the name, so they are porting it over here.

We have to admit that we have been a bit critical of Microsoft re-using product names. They have been recycling them for decades (don’t get us started talking about the three different products and IP licenses called “Active Sync”). And there will undoubtedly be some confusion with this one as well. But the changes are an aggressive continuation of Microsoft’s play at taking back market share in business productivity apps from Google.

Google's products have always been technically and feature-wise inferior to the Microsoft suite. But they kept packing value into their freemium model and attracting a ton of users. But Microsoft is back, and they are holding the prices low while packing real, sophisticated apps and services into the suite — all for just a couple of bucks more per month than the Google cheap machine.

And this strategy is showing results. The Office platform has been showing incredible growth, no commanding more than 38% of the market with >1.4 million business and > 200 million individual accounts. You can read about the new services on VentureBeat and check out the updated user statistics here.