Get Ready for Windows 11 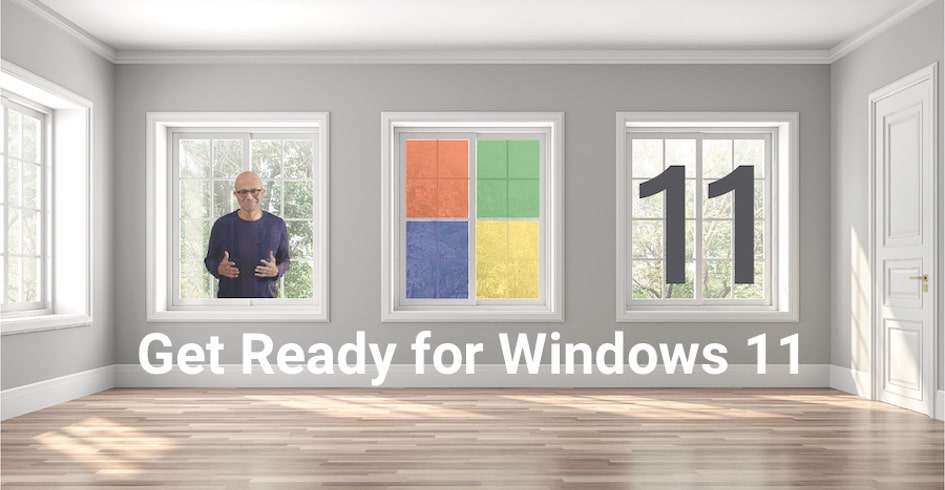 The Windows 11 Announcement from Microsoft

June 2021 has been another big month for Microsoft announcements. There is a lot going on and we will try to cover as much of the news as possible, but the announcement on June 24th regarding Window 11 is the perfect place to start.

Microsoft hosted another one of their slickly-produced online announcement events to get the word out about the pending release of Windows 11 — likely to come in Q4 of this year. For those who’ve been around the Windows tech stack a while, this sudden shift to a major version was not necessarily a surprise, but it was a big change. That’s because when Microsoft released Windows 10 back in 2015 the idea was that that would be the “last” major release. From then on it was only supposed to be a series of updates and minor releases to support 10.

Then, last month, came the news that Microsoft had halted work on what was called “Windows 10X” and had made a final update release. They also made the decidedly cryptic declaration that more news regarding Windows was on the way — you may recall that we posted on social about that at the time. Now we know why.

Microsoft gets credit for the swift pivot. And they certainly have created a lot of professional content in a very short amount of time. There is a LOT to unpack … and we are going to do so. But if you want to start by watching the announcement video for yourself, there is a link in the resources section at the end of this article.

Let’s touch on some high points of the announcement and what jumped out to us.

Comments on the Core Messaging from Microsoft on Windows 11

Microsoft knows that they have a communications and PR challenge on their hands. They needed to reinvent their flagship #Windows11 OS without alienating 35 years worth of users the have stuck by them through the ups and downs. It’s sensitive because #Windows has to become more like <shiver> Apple in a lot of ways.

That’s only fair. Apple has been influenced by Microsoft. And Apple has done great things too, especially in the user experience area. Windows needed to be faster AND quite frankly it needed to be more beautiful. Microsoft needed to communicate that without losing the intimate — yes, I said intimate — and emotional connection that developers and users have with their flagship OS product.

That’s why the announcement video and blog post are filled with comforting, warming language. Microsoft is saying something like, “Yes, we changed everything and are becoming more Mac-ish. But it’s going to be OK and you’ll like it better.” We think that they’re right.

Here are some of the core messaging ideas pulled directly from the announcement:

You can see the fingerprints of the Communications and PR teams all over it. But this is such a big change, all that attention is warranted.

It’s obvious that Microsoft Windows 11 is adopting a more Mac aesthetic when it comes to user experience and design. But that doesn’t mean that they’ve forgotten that Apple is a rival. Windows 11 they are focusing on key differentiators, such as:

The new Windows 11 marketplace will have lower fees for developers and — importantly — if developer ISVs “bring their own commerce engine” they can sell into the platform ecosystem with no fees at all. This is VERY “in-yo-face” to one of Apple’s biggest challenges right now. If you remember, Apple is facing multiple challenges to their restrictions and fees in the App Store. The most prominent example is Epic Games — developer of the hyper-popular game Fortnight, and others — who trail is working its way through the courts as we write this article.

Windows 11 will support Android Apps, Amazon Marketplace Apps, and more. The announcement content focused on some interesting language not normally associated with a technology release:

The resulting seismic rumbling in Cupertino was NOT an earthquake this time.

All Apple devices — PCs, tablets, phones, speakers, etc. — share seamlessly with each other. For content creators this is a HUGE advantage for Apple. Windows 11 will allow the interaction and sharing of assets between devices no matter what device or OS!

We REALLY want to see this in action.

Apple actively markets to the “creator economy.” Microsoft is messaging that they want those folks to come to Windows PCs and tablets. That kind of talk keeps Tim Cook up at night.

Microsoft pushed out a TON of content on announcement day. Most of that was for general public consumption. But they still know that the bread-and-butter of Microsoft is the developer community. Even the public announcements stressed this courtship. They even used the “L” word … “love.”

Behind the scenes there is a lot of content for developers to help them prepare existing apps for the changes AND to get ready to write new apps for the new OS. We’ve put some related links at the end of this article to get you started.

Upgrading to Windows 11 will be free to Windows 10 owners when it comes out. But importantly, not all devices will be compatible … how would you like to be that guy? We put a link below to download Microsoft’s PC Health Checker to see if you can upgrade to Windows 11 when the time comes.

The fact that some devices will not be able to upgrade to Windows 11 is prima facia evidence that deep structural changes have been made. Since the Developer Insider release has only bee available for a few days, no one has had time to do a thorough review of the technical stuff just yet. But from what Microsoft has shared so far, it pretty clear that Microsoft has renewed focus on their flagship operating system and have invested to make it a competitive, world-class platform.

Thanks for reading. If you have questions about getting your application ready for Windows 11 deployment, or if you just want to talk about your project, give us a call. We are always happy to help.

Here is the official Windows 11 announcement page with a full video and additional links:
https://www.microsoft.com/en-us/windows/event?icid=mscom_marcom_H1b_Windowsliveevent

Read the Microsoft blog regrading the discontinuation of development on Windows 10X:
https://blogs.windows.com/windowsexperience/2021/05/18/how-to-get-the-windows-10-may-2021-update/

Developers and testers can get more information along with Insider Preview builds of #Windows11 here:
https://blogs.windows.com/windows-insider/2021/06/24/preparing-for-insider-preview-builds-of-windows-11/

At the bottom of this announcement page there is a download for the Microsoft PC Health Checker which will tell you if your device will be able to upgrade to Windows 11:
https://www.microsoft.com/en-us/windows/windows-11

Additional commentary and references from Cnet regarding Windows 11:
https://www.cnet.com/how-to/windows-11-will-be-free-to-download-heres-how-to-make-the-update-if-your-device-is-compatible/