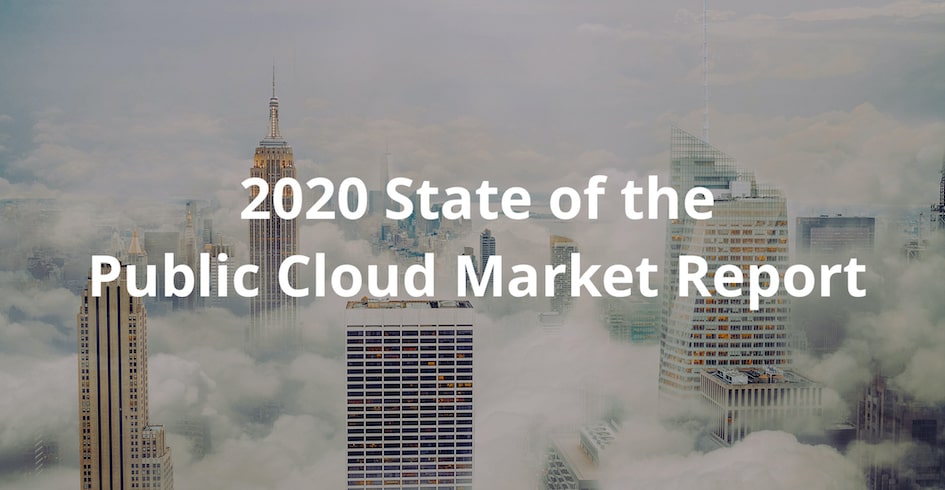 How are AWS, Azure, and Google Cloud Holding Up at the Dawn of a New Decade?

The term is so ubiquitous that you don’t even have to use the quotation marks these days — we’ll do it here for nostalgia. We have been around “The Cloud” since day one. In fact, a member of our team sat on a two-person panel discussion with an Amazon Cloud Evangelist at Pubcon in Las Vegas to introduce the concept and terminology way back when pterodactyls were pulling cables in the datacenter … I think it was in 2006.

My how the world has changed since then. We have gone from a niche market where we have had to explain everything in detail against market resistance to near blanket acceptance of these platforms by small businesses (SMBs), international enterprise organizations, governmental agencies, and everything in between. In fact, the federal government has become one of the world’s largest consumers of cloud services. Just two months ago (October 2019) the federal government awarded one of the largest public cloud contracts ever — the Joint Enterprise Defense Initiative (JEDI) — to Microsoft’s Azure Cloud services to the tune of US $10 billion. Microsoft edged out arch cloud rival AWS for the coveted deal. In a fit of bad sportsmanship, Amazon is challenging the deal in court, which is unlikely to win any points in future contract negotiations. But it is an indication of just how significant that deal is.

As impressive as that contract is, what’s REALLY impressive is how they managed to work in the terms “Enterprise” and “JEDI” into one technology contract — thus pleasing every computer nerd on the planet in one fell swoop.

We have to recognize that public cloud infrastructures are now a worldwide phenomenon. There have been remarkable gains in Russia and China with home-built public cloud solutions. But by far, the early adoption and largest market share players are located in the United States who are now serving much of Europe, Southeast Asia, Australia, and other locations. And while there are some niche players, the market is still ruled by the Big 3 — Microsoft Azure [$MSFT], Amazon AWS [$AMZN], and Google Cloud [$GOOG] with Alibaba Cloud coming on strong. IBM took a bow on the stage when it acquired early innovator SoftLayer, but they quickly converted that platform to an add-on service for their enterprise software business and left the broad-spectrum customer acquisition play to the Big 3.

Unless something changes in the market, it is safe to focus on the Big 3 as a proxy for the whole.

The Current State of the Public Cloud Market

Without a doubt, Amazon AWS got an early jump. Google and Microsoft sat back and watched (a bit too long) and this gave Amazon AWS first-mover advantage. Microsoft pushed the Azure Cloud into the limelight in 2008 and the Google Cloud did not officially launch (then called AppEngine) until 2011. But things really got going in 2014 when Satya Nadella became CEO of Microsoft and revamped the entire philosophy at Microsoft (for the better), betting the company’s future on building foundational platforms like Azure and retooling their licensing and development tools to further that vision.

So, depending on how you count and whose numbers you trust, Amazon AWS had about two years of free reign and five years of leadership before Microsoft and Google responded. For a while, that translated into a significant technological and market advantage. But there is evidence that AWS’s dominant position in public cloud services is weakening. So, let’s take a look at the data.

Amazon does not break out revenue from its public cloud operations, so it can be hard to get a handle on actual revenue and growth. But Microsoft does and the numbers are rolling out for Microsoft Azure and they look pretty good. As 2019 comes to a close, Azure public cloud revenue should top US $39 billion for the year — a whopping 21% increase Y/Y. Similar to Amazon AWS, Alphabet (the parent company of Google) does not break out public cloud revenue clearly.

But revenue does not tell the entire story. We can also measure cloud growth and market share by workload and other factors. Gartner — the giant technology research and analysis firm — worked with investment powerhouse Goldman Sachs to project the market share landscape of public clouds along with a little historical comparison. The data is enlightening and shows the dominance of the top providers and how the market has shifted decisively in just three years.

On the surface, those numbers just look like Amazon is still running away with all the cloud hosting candy. But if you consider that over the span of three years Amazon AWS captured 12% additional market share and Microsoft Azure captured 14% it shows that Microsoft is growing faster in an established market no matter how you measure it — Y/Y revenue increases, new customer counts, in absolute dollars, and in absolute market share. And you can bet your bottom dollar that Jeff Bezos at Amazon understands this too.

The Public Cloud Market in 2020

Business Insider takes all of this a step further. They polled a panel of technology and financial experts for insights into Microsoft’s future with the consensus that Microsoft was positioned to teak substantially more business from Amazon AWS in 2020. And they quote Dan Ives — an analyst for Wedbush Securities — who estimates that government cloud contracts will reach US $100 billion over the next ten years. “We believe federal deals on the heels of the flagship JEDI win will be commonplace for Nadella and Co. in 2020 ….”

Will the 2020s Be Azure’s Decade In The Cloud and at The Edge?

The one wild card in the mix is the advent of “The Edge” — locating smaller, nimble datacenters closer to the end-users to reduce latency and support the newest applications that require near-instantaneous connectivity. But perhaps not surprisingly, Microsoft CEO Satya Nadella has a plan for that too.

During a recent shareholder meeting, he laid out the strategy of extending Microsoft’s global network of 54 datacenters — already the largest — to The Edge using new products and services. These include new tiny microprocessors for Edge devices called Azure Sphere and a new service to extend Azure to local and on-premise datacenters called Azure Arc. In Nadella’s mind, this is designed to “future-proof” the Azure platform.

A person who thinks that they can accurately predict the future is a person unaware of the past. But all the indications are that even after a late start Microsoft is well-positioned to lead off the new decade in a strong position.

If you have any questions about Microsoft Azure or want to discuss your cloud migration and deployment strategy, let us know. We are always happy to help.

Touchstone article by ParkMyCloud Blog from April of 2019:
https://www.parkmycloud.com/blog/aws-vs-azure-vs-google-cloud-market-share/

Business Insider article, “What’s ahead from Microsoft in 2020” (paywall):
https://www.businessinsider.com/microsoft-year-ahead-2020-amazon-web-services-cloud-2019-12

Logic Monitor’s “The Future of the Cloud” report:
https://www.logicmonitor.com/wp-content/uploads/2017/12/LogicMonitor-Cloud-2020-The-Future-of-the-Cloud.pdf